WELCOME to my page about COOKIE'S BUSTLE. It's a fascinating game and I'd love to do what little I can to tell the world about it!

Cookie's Bustle is a 1999 point & click adventure game by Rodik. It's the first and last game the company ever made- besides Cookie's Bustle, they just made a couple pieces of office software. I'm currently struggling to find a whole lot of information on the company, but it seems they dissolved not long after Cookie's Bustle. That's not too unreasonable- it only sold about 100 copies!

Unfortunately, the poor sales also mean no localizations, and that it was lost media until the game was found & uploaded online just a few years back. But, well, it's found media, baby! And if you follow "Classics Of Game", you may recognize it from a several-clip-long span of just Cookie's Bustle clips. That's actually all I know about "classics of game" despite several streamers I follow bringing it up frequently.


Okay, but what's it about?

I am so fucking glad you asked.

Aliens crash landed in a fictional country in the South Pacific called Bombo World, and the president of Bombo World offered them the northern portion of the country in exchange for some of their technology. (I really like the name Bombo World.) The aliens accepted his offer, and built a city- Dero City. Here, they started hosting a sports competition. 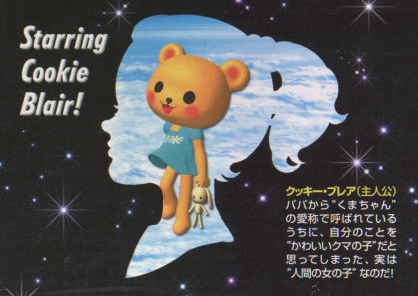 Cookie really wants to win the gold medal. It's up to you to help her, from solving puzzles in the way of her participating in the competition, to taking care of her basic needs!


Ohhhh but wait. Hang on. There's terrorists. I sure hope that doesn't cause any problems...


How do I experience this?

Sadly, there's not much in the way of fan-translations at the time of me making this page. But, inexplicably, the vast majority of on-screen text is in english! There's a bathroom that has a korean sign for some reason? And some other outliers, many of which I'm probably forgetting. But, hey, in terms of cutscenes and finding your way around, not knowing japanese won't be too much of a problem!

It's still a good time if you don't play it first-hand- I didn't, and I'm the one trying to tell you about it! But if you like games like Moon, it's definitely worth a shot. (I also got some vague Wonder Project J vibes, but I only played that for, like, 10 minutes as a kid, so I'm not exactly confident about this.)